I did get Milkweed 3 done in time for show n tell at our Guild meeting at the beginning of the month.  It is now hanging in the entrance way 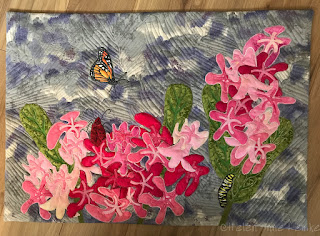 The quilting was inspired by a fern in a bunch of flowers I had bought for myself.  I took it downstairs and had it sitting near the sewing machine while I quilted.  This wallhanging has a facing rather than binding.

The other goal for June was to finish my Cherrywood challenge quilt for the Diana Challenge.  I was making good progress when Cherrywood announced an extension to Dec 31 due to the COVID 19 pandemic.  I finished the step I was working on, washed the piece to get the washout marker out and ironed it.  Its now ready for the pieces to be appliqued on but I've paused to consider if I want to make any changes since I have extra time.  I'll get going on the centre as that won't change.  Maybe by the time that's done, I'll have decided what to do with the four corners.  I do want to keep going on it as I really don't want to spend Christmas working frantically to finish it.

I had planned that milkweed 4 would be a winter piece but I'm having problems coming up with a design idea.  As encouragement to actually make the series pieces instead of just thinking about them, I signed up for Katie Pasquini Masopust working in a series class.  Its been very helpful.  As I finish a piece, I send her a photo and she gives me a critique including constructive feedback and suggestions for concepts to think about next time.  Milkweed 4 grew out of this feedback and I'm loving how its coming together.  My goal for July is to finish quilting it this month and see if I can figure out the winter piece.  I spent a morning with a cousin recently and we did some sketching.  I think something was starting to gel in that session.  I need to go back and play some more.

Thank you for commenting. I've turned moderation on at the moment and approved comments will appear shortly. 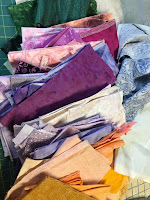 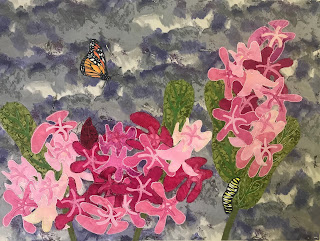