Showing posts from October, 2016
Show All

October OMG - One bite at a time 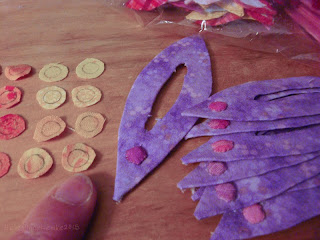 How do you eat an elephant?  One bite at a time.  That's a pretty good description of how this quilt is going.  Its been a long time since I started the Love Entwined quilt.  I thought it was two years ago but when I look back it was 2013.  I found the pattern when Esther was first releasing it as a free BOM.  I've changed my mind several times about how much I will do but at the moment I'm just doing the centre block. The quilt has had long periods of idle time. Back in 2013, one of the first steps was the tiny circles around the compass.  They seemed very intimidating at the time and I tried several ways of prepping them before going back to my favorite trace the shape and needle turn.  As documented here , they weren't so scary after all.  More little circles appeared on another shape in the centre and I took this photo during the preparation to show the size of them.   One of the next things that looked really intimidating was the zig zag border which I fina
2 comments
Read more 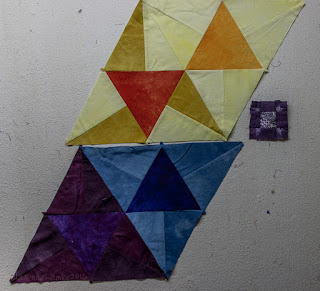 Last month I signed up to do a Gravity Quilt workshop at Hobby Horse .  Yesterday was the second class.  I decided that I should take some of the 365 blocks with me to use as enders and leaders while I was stitching the blocks for the gravity quilt.  The gravity quilt blocks I was making used 6.5" components.  The 365 block had me make half square triangles that I trimmed to 7/8" the joined with some 7/8" squares to make a four patch before joining with some slightly larger pieces to make a 3.5" square. Its a study in contrasts :) two gravity blocks and Tulip Lady Fingers for the 365 quilt I really enjoyed sewing the larger seams.  I had a second block with me but didn't get to it.  That's the block from Oct 21st so I have three more blocks to make from this week to be up to date.  (since the designer is in Australia, I always get tomorrows block today.  Rather fun).  Soon I'll start stitching these small dark blocks into four patches to join
Post a comment
Read more 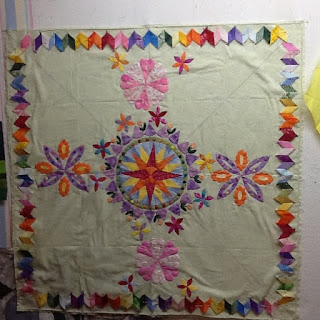 Participating in Heidi's OMG worked well last month so I'll try again this month .  This month I'd like to get the zig zag border stitched down.  I wasn't sure if that was practical but last night I made really good progress stitching the first border at the guild meeting so I think its quite doable.  Once the zigzag is done, I'll be able to start planning the 4 vases of flowers that go in each corner.   Other things to be worked on this month are the wedges for the Gravity Class, the 365 blocks and place mats for the guild to donate to the Meals on Wheels.
2 comments
Read more 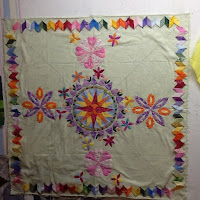 At the beginning of the month, I joined Heidi's OMG . My goal for September was to get the zig zag border prepared for my Love Entwined quilt. Despite having to make some new pieces because I had the wrong number of each colour, the border pieces are joined together and its pinned in place ready to be stitched. It's nice to have that bit done. I'll probably machine baste it in place so it's easier to take in my purse and work at when I'm out. The stretch goal was to get the applique done as well.  That didn't happen but I'm pleased to have the pieces ready to stitch.
1 comment
Read more
More posts