Showing posts from August, 2007
Show All

I started the day at the Louth Side Trail. I saw a deer go bounding through the woods but was too surprised to see him to remember to take a photo. A lack of rain this summer made for a dry waterfall. The next trail was Rockway Falls. This time I saw a tail go darting down a hole. Paused to look and saw a little garter snake. As soon as I took this picture he disappeared. Moved so fast I hardly saw him go. I think this is the point were the notes say the creek is sometimes not fordable in peak flow. With all the hot weather, there was no water to be found. But there was interesting fungus I missed the entrance to Short Hills Provincial Park and drove past the next hike at Terrace Creek. So tried to find hike #1 and got lost again. Came back and tried Terrace Creek again. The second time I found it so went for a walk there. The trail is right beside a field of grape vines. A nice high foot bridge but still not much water. Never did see a lot of water on this set of hikes.
Post a comment
Read more

Our group at work at a picnic at one of the community parks. This is the group. In the back row (L-R): Alexis, Gabriel, Rab and Ghazala . In the Front row: me, Carlos It was a potluck. Rab and Carlos brought chicken and Carlos brought a small BBQ This wasp landed on my empty plate and took the leftover piece of chicken sinew. I didn't realize they were so strong! We played boccie ball after dinner. The several people feed left over bread to the gulls. Some of the gulls were not very keen to share.
Post a comment
Read more

So the trail starts of very nicely , then this comes into view. There are two ladders to climb down at the Hole in the Wall. I didn't see the warning sign until after I came down the ladders.... Then there was this path. Much easier. A 100 years ago, there lime was produced here. This is one of the lime kilns. The wooden strapping is in place to help preserve the building. The area is fenced off while they figure out how to preserve the kilns.
Post a comment
Read more 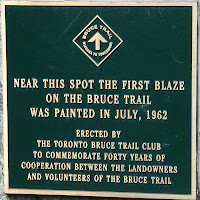 This afternoon I went out to the Hilton Falls Conservation Area just of Guelph Line North. Near the beginning of this trail, is a marker to commemorate the beginning of the Bruce Trail and a reminder sign about the rules of the trail.... The bridge at the beginning of the trail was a little weather worn in one spot. Later there was a style to climb up and over. It came in handy as a tripod... I was enjoying walking on this nice wide easy trail -- then the markers said to turn left down this one.... In the woods, there is this pothole that was created by the glacier melt.... At the end of the trail are the Falls. At one point there was a water wheel here but the only remains are the arc from the bottom. The falls were "turned off" when I first got there but suddenly the water started to come over. Some boys came down and were running under them. One of the boys said the turned the falls on by opening a damn up above.
Post a comment
Read more

On the Saturday of the August Long weekend, I went for a hike on the Bruce Trail following the Crawford Lake trail. Crawford Lake Conservation Area is just off Guelph Line South of the 401. There’s an Indian Village reconstruction at the conservation area. Outside the area, they’ve created a series of gardens that showcase some of the native plants. Did you know that Prickly Pear Cactus is native to Ontario, Canada?!? Today its endangered in Ontario – its only found in the wild in two areas. Prickly Pear Sign board about the Prickly Pear It was about 30 Celsius on Saturday. The area is used in the winter for snow shoeing -- we could only wish for some ice.... They put signposts at the beginning of the trail(s). The only thing that isn’t noted here is the new section of the trail that they added near the lookout. It was optional but a pretty walk At the lookout over Nassagaweya Canyon, there were birds enjoying the thermals over the valley. Turns out they were Turk
Post a comment
Read more
More posts